Have you heard of National Novel Writing Month? If you haven’t, I’ll tell you.

The thirty days of November is a challenge to write 50,000 words in a month, to write a full-length novel in one month. It started in 1999, and while its internet-based, the program includes a lot more than thousands of people around the world writing together. NaNoWriMo is a non-profit organization and it runs on donations. They promote writing for all ages, and their program runs all year round, encouraging people to read and write. Novels written during NaNoWriMo have been published professionally, such as the New York Times Bestseller The Night Circus by Erin Morgenstern and Wool by Hugh Howey.

NaNoWriMo is a completely valid way to make sure you’re sitting down and writing, regardless if you write  50k words or if you’re even writing a draft of a novel. I’ve been doing NaNoWriMo since I first heard about it six years ago, so since 2014. I used NaNoWriMo to write my debut novel The Other Side which can be found on Amazon.

With all that out of the way, I declare that I’m ready to tackle National Novel Writing Month for 2019.

And so, the first step to preparation for National Novel Writing Month is to…clean my room and my writing space. I don’t know about anyone else, but I find it excruciatingly difficult to concentrate and work productively in a dirty unorganized space.

The second step is to make sure I’ve got a solid idea about where I want to start. For this new novel, still unnamed with the current placeholder title Zak Pittman, it’ll start with my character, Zak Pittman working at the bacon factory. I know nothing about working in an assembly line at a bacon factory, so I interviewed my Mom, who does have that knowledge. So when tomorrow starts, I have the interview facts ready, and I can start writing.

Final and third step is to have my sweet incentives. That’s right, dessert or something chocolate or sweet that’ll make me want to hit my 2,000 word count goal a day. If I don’t hit the mark, then I can’t eat it. I went shopping the other day and got mug treats, a type of dessert snack that you add milk or water, microwave for 30 seconds and voila, cinnamon coffee cake or chocolate cake in my coffee mug. If that won’t get me writing, I don’t know what will.

NaNoWriMo starts tomorrow, Friday the 1st and I’ll be ready for it. WIP’s first draft will be finished in thirty days.

And as I write, my cat Aomine keeps me company by my side. 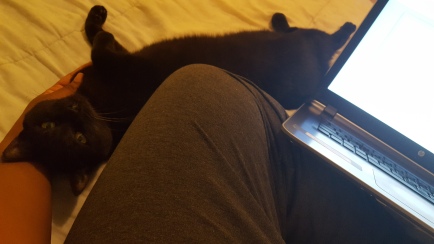