I remember the first time I heard of a muse mentioned in relation to writing. I had no idea what this woman was talking about. A muse? A fantasy deity that inspires writing? And she only wrote when the muse visited her, and didn’t write unless she was inspired? What surprised me even more was that the other writers in the classroom knew what she was talking about and agreed.

I must have missed out when muses were assigned.

Who are the Greek muses? And what do these mythological women have to do with inspiration? The idea is that the Muse brings inspiration, and thus with inspiration, a creator then creates. The Muses dates way back to Greek mythology. In the legend, Zeus slept with Mnemosyne for nine nights in a row, and she subsequently had nine daughters. The daughters each symbolized a form of artistic inspiration and creation.

These deities gave individuals such as artists, writers and philosophers the inspiration necessary for creation. I’ll specifically talk about the impact of the muse in writing, generally and in my life as a writer.

It seems like writers think of the muse as a mystical being who floats down from on high and imbues them with the floating brimming sensation of inspiration. In reaction, the writer starts to write manically. Its true inspiration can hit sometimes like a mac truck, and I’ll write like crazy, the words flowing out of me. But that’s rather rare. I’ll talk about how inspiration really works another time.

Does the muse actually exist at all? Seeing as the idea is from Greek mythology the resounding answer should be no. However perusal online suggests that there are plenty of writers who believe the muse is a real thing, and even have ideas of what their personal muse looks and acts like.

For me, as a writer…the muse doesn’t exist and has never existed. I don’t imagine anyone or anything that comes out from the ether and gives me inspiration to write. The idea of believing or waiting for some heavenly or mythological being to come down and give me the will to write seems both a mixture of insanity and wasting time. How long does it take for the muse to show up anyway?

I don’t want to wait for the muse.

I want to write now.

In my humble opinion, there is no muse. There’s only the writer, and the writer’s will to write. Waiting for some enchanting being to anoint me with mystical energy isn’t something I believe in, or even attempt to achieve.

What I achieve is setting up my computer everyday, whether I’ll be on my bed, on the couch or at my desk, pull up my current WIP documents, I’ll put on one of my YouTube music playlists (Enchanting/Calm Music, Soul/Beautiful Music, Battle Music, Wizarding World Music and Ambience, Lord of the Rings Music & Ambience) and I start writing.

And as I write, my cat Aomine keeps me company at my side. 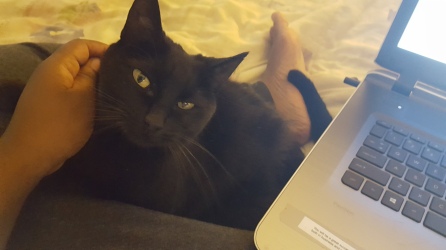