There are days when I can’t write. Nothing on the paper. Nothing on the computer. Blank space. What am I waiting for? What am I afraid of? What holds my fingers back from the keys and keeps my pen from the paper? Most people would probably say fear. Fear of failure. Fear that whatever I write won’t be any good, so why bother. I don’t really think of procrastination as being afraid of anything. I love to write.

How do I beat procrastination?

Yes, I really mean food. I buy myself something really nice and delicious, and tell myself I can’t eat it unless I get some writing done.

When I was writing the final chapters of The Other Side, my debut novel, I bought a huge slice of New York Style cheesecake, and wrote on the to-go box that I could only eat it if I finished the last chapter, and completed the novel. By Saturday exactly, that was my deadline. This was in June of 2017. The Other Side became available for purchase September 2018.

Thinking of that delicious cheesecake got me through and it tasted so much better eating it knowing I had earned it. The writing got done.

What’s in my fridge right now? A Chocolate Chunkin’ Pumpkin Cheesecake, from Olive Garden last night. According to the menu and the online site, it’s pumpkin cheesecake topped with decadent brownie and rich chocolate fudge over a chocolate cookie crust. 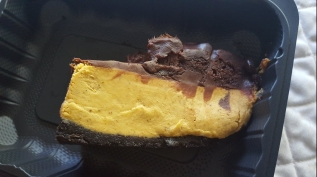 I can’t take a bite out of it unless I finish this blog post. I also can’t eat the entire thing unless I make substantial headway on the outline and character profiles of my current WIP.

For me, I go more with the carrot approach than the stick. Dangling a sweet treat in front of my face will spur me to write more than thinking up a punishment. I really want that Chocolate Chunkin’ Pumpkin Cheesecake, so I’m off.

What do you do to beat procrastination?

And as always, while I write my cat Aomine keeps me company at my side.