Stories matter. Stories are as old as time. We’ve been telling stories before we knew how to write, and passed stories down through oral traditions. Telling stories is an innately human tradition, and there’s a reason why in all cultures all over the words humans tell each other stories. We tell stories all the time. Retelling what happened at work today, that’s a story. Gossiping: I heard that she said that he said that his cousin said, and telling that to friends and family and coworkers: that is a story.

Think about stand-up comedy. Stand-up comedy is storytelling, the comedians tell stories that may or may not be true, and wring out laughs of their listeners. A lot of comedians get inspired by other comedians, and certain jokes start to spread, repeating again and again, transforming down the line.

Think about telling children stories at bedtime to help them sleep. When Harry Potter first came out, my mother used to read it to my sister and me, we’d all cuddle next to her in the bed and she’d read it out-loud. I have fond memories of my dad reading Dr. Seuss to me and my sister, especially Hop on Pop and we’d start bouncing on his stomach.

All these are stories that we tell each other.

Novels are just another part of the storytelling process. And when it comes to novels, for me the best stories are the ones that end. I’m serious. A story that goes on and on with no conclusion is the worst. Series with no last book. Standalones with certain plot threads left unaddressed. That is a downside of stories.

But one of the greatest aspects of storytelling is the emotional interaction between the reader and the story. With my stories, I want you to feel something. Be entertained, sure but it’s okay if you’re not entertained. I can’t control if you enjoy my story or not. But feeling something is the real key. If reading makes you angry or sad, if you’re reading while laughing or crying, that’s the emotional response I want to get out of my readers.

The worst response is indifference. If while reading a story you feel nothing at all then that’s a failure on the behalf of the writer. Feeling utter disgust or rage or hatred while reading is better than feeling nothing at all, because the story has been powerful enough, (or horrible enough) to incite feelings and reactions and emotions.

Before things like copyright really got started, when someone published a book, another author would publish their own version or their own sequel about that book with little regards to the original author. Written in 1740, Pamela; or, Virtue Rewarded  by Samuel Richardson had unofficial sequels written about it by other authors nearly immediately after its publishing. Its also interesting to note that Pamela; or, Virtue Rewarded is considered the first English novel, making these unofficial sequels fanfiction, written centuries before the Star Wars fanfiction came out in the 1960s.

From the beginning of novels there was fanfiction. Fanfiction and novels go hand in hand, along with other forms of entertainment. And those forms are also all stories. TV shows, dramas, movies, video games, comics, manga, Webtoons, those are all mediums to tell stories. People become fans of these stories, and want to tell their own stories. We’re all encouraging and inspiring each other.

Its all valid and meaningful and worth acknowledging. The world needs stories!

One day mine will join the pantheon of stories out there.

And as I write, my cat Aomine keeps me company by my side. 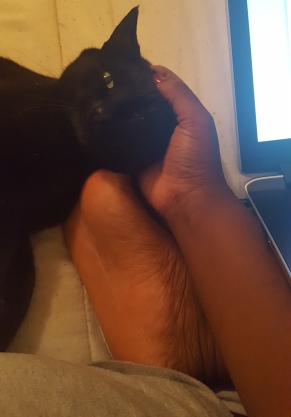